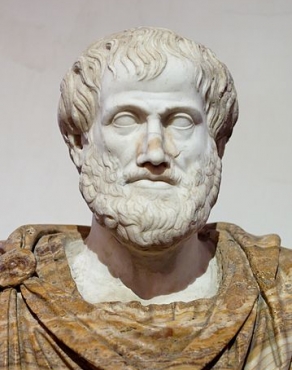 Greek philosopher, born in Stagira, Northern Greece. Son of Nicomachus, a physician in the Macedonian court, he learned biology from his father and studied at the academy of Plato from the age of 17 until Plato died, 20 years later. He then became tutor of Alexander, later Alexander the Great.

He came back to Athens and in 335 established his own school, the Lyceum, essentially a research institution, covering many disciplines. His followers became known as peripatetics after the peripatos (covered walk), where – perhaps pacing up and down – he taught. In 323, after the death of Alexander deprived him of the protection of his former pupil, Aristotle left Athens and took refuge on the island of Euboea, where he died.

His work, known as Aristotelianism, covers many subjects, including philosophy, several sciences, poetry and drama. His influence on western civilisation has been immense, especially in establishing scientific method. In the Middle Ages his doctrines were combined with Christian theology, notably by St Thomas Aquinas. In his philosophy, he set out a system of categories or basic classifications into which all things fall.

Some things, for example, are classed as substances: those entities, if they are such, are the foundations or possessors of each ordinary thing’s various properties but not properties themselves. In his Metaphysics (merely meaning that which comes after physics), he also elaborated doctrines on the distinction between form and matter, on the development of potentialities into actualities, and on various kinds of cause. At the bottom of an ascending scale was ‘prime matter’, with potentiality but no ‘form’ or function other than existence and therefore incomprehensible.

At the top, and equally incomprehensible, was the equivalent of God, with potentiality fully realised and therefore no potency, but to be regarded as ‘pure act’ (in these terms the soul’ is regarded as the ‘act’ of the body). In between, the terms ‘form’ and ‘matter’ may be sometimes interchangeable. A familiar example is that brick is ‘form’ when related to the clay of which it is made but ‘matter’ in relation to the building of which it forms a part.

In logic Aristotle claimed to be the first to work out the theory of reasoning by syllogisms, arguments of a particular form whose conclusions follow necessarily or certainly from their premises. Aristotle’s Ethics contains the doctrine that virtue consists in a mean between excess and deficiency, and in his Politics he argues for a form of government which is an oligarchy of merit, preferably with the consent of the governed. Of Aristotle’s science, his biology was uneven.

His system of classification was impressive, but his teaching that the brain was essentially a cooling mechanism for the blood, and not the centre of reason (which he located in the heart), although contrary to *Hippocrates and rejected by *Galen, was dominant for nearly 2000 years. In The Generation of Animals he taught that females were ‘deformed males’, a concept adopted by Galen and Aquinas. However, he seemed to have grasped the central feature of genetics, that encoded ‘information’ can be transmitted (and transformed). He dissected more than 50 species of animals and first identified the placenta.

His view that the sun rotates round the earth, which is fixed in space, was one of a number of doctrines that were taken as unquestionable in the Middle Ages and had the effect of delaying scientific advance. His views on drama, contained in his Poetics, led to the ‘rules’ of the Renaissance, including those of the unities of time and place