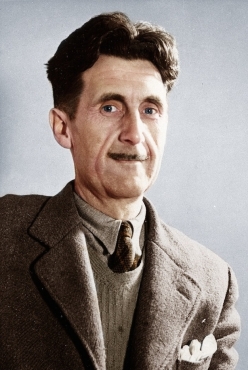 George Orwell (named Eric Arthur Blair at birth), is a British writer, author of numerous essays, journalistic articles and one of the most controversial people of his time. He is the man who revolted against the society, the one he wanted to be part of so badly. He wrote about himself that he was an alien in this world and didn't belong to this time. He is the author of the legendary terms that have penetrated our daily life today, such as Cold War, Big Brother, memory hole and many others.

The author’s works carry a strong reference to his own believes and life events. He was a fierce opponent of Stalin autocratic regime and communism, avidly supported democratic socialism. These convictions were pictured in his anti-Soviet satire “Animal Farm” (1945) where he described the transformation of revolutionary principles and programs. His participation in the Spanish Civil War was described in “Homage to Catalonia" (1938) and “Looking Back at the Spanish War” (1953). His anti-utopia “1984” (1949) pictured how through losing language a nation can lose its freedom to tyranny.

This outstanding individualist and political idealist was born on June 25, 1903, in British India. His grandparents owned land plantations and lived relatively well from their income. His father was a government employee and the author didn’t reveal much about his mother. In 1904 the boy already moved to Great Britain together with his mother and a sister. George obtained his primary education at St. Cyprian school and then received a scholarship to attend Eton College from 1917 to 1921.

The next year after graduation he joined the Imperial Police in Burma where he served for 5 years. He gained a reputation for himself as an outsider who was adept at learning languages and writing. His colleagues talked about him as someone who had a profound sense of fairness. His autobiographical novel “Burmese Days” (1936) talks a lot about author’s experience of these days.

After some years Orwell was full of disappointment in the way the society and political environment of the contemporary world functioned, he quit his job in 1927 and moved to Europe, where he lived in London and Paris. There he was doing random jobs and started to develop his writing skills intensively. Following Jack London experiences, he attended the poorest parts of the city and tried to appear as local as possible. One time he even got so drunk, that he was taken to the police station. He was let go after 48 hours. The author confessed to having done it intentionally, with an aim to experience what it’s like to be in prison.

George Orwell moved to Europe with an already formed intention to become a writer. Many critics characterize his mode of life there as a revolt against society. This period was reflected in this book “Down and Out in Paris and London” (1933) that described a terrible poverty in these regions. This is the first book that was published under his pen name Orwell, which came from a name of the river in England that the author used to frequent during summer breaks. The author stuck to this pen name from 1935 onwards.

In 1936 George Orwell got married to Eileen O’Shaughnessy. Together with his wife, they adopted a boy. Unfortunately, his wife would die in 1945 and the author remarried to Sonia Brownell, who was also a journalist, in 1949. This second marriage lasted for about 3 months.

Shortly after the first marriage, Orwell signed up voluntary to take part in the Spanish Civil War. He spent over a year fighting on the side of the republican government. In May 1937 he was heavily wounded and hardly made it to the French border with his wife.

The memoir about this experience, entitled “Homage to Catalonia” (1937) was initially rejected by a British publisher due to obscene language and multiple mentions of terror and anarchy in the Republic because the publisher believed that such claims damage the socialism movements and USSR government as its leading force. During Orwell's lifetime, the book wasn’t very popular, it sold not more than 50 copies annually.

Participation in the Spanish war motivated Orwell to turn to English Socialist and Labour movement, making him one of the most active opponents of communism. During the Second World War Orwell served as a BBC commentator, issuing daily news pieces. According to his colleagues, he was deeply disappointed in USSR and looked at the events there as treason to the true revolution ideas. He considered himself the warrior for truth fighting soviet totems that other socialists were worshipping.

By the end of the war, the author wrote his legendary “Animal Farm: A Fairy Story” (1945) - the text that is now considered a culmination of his revolutionary disappointment feelings. The book deals with animals that one day received an opportunity to run the farm on their own. It is a satire on the Soviet revolution and the crash of the hopes it produced among many romanticists around the world.

Orwell died of tuberculosis in a University College Hospital in London on January 21, 1950. Throughout his literary career, the author stayed true to the intentions to portray how values are being washed out and norms are being shifted in the modern world. His last anti-utopia, “Nineteen Eighty-Four” or “1984” (1949), pictures the totalitarian society with horror and sorrow as the writer saw it in his mind.

In his writing style, Orwell believed that texts should be crystal clear and was always using a very simple language in his works. His numerous essays, among which are “Shooting an Elephant” (1936) and “Politics and the English Language” (1946) are a proof to that. Orwell believed that his writing duty was to defend the interests of democratic socialism and fight the totalitarian tendencies that were a threat to the world. 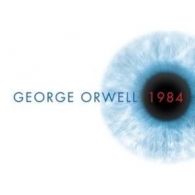 Perhaps one did not want to be loved so much as to be understood.

War is peace. Freedom is slavery. Ignorance is strength.