Order Essay
The Iliad by Homer

Order Essay
The Aeneid by Virgil 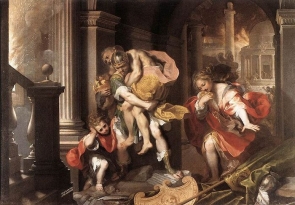 Aeneas was the son of the Dardan king Anchises and the goddess of love and beauty Aphrodite, the hero of the Trojan War and the founder of the city from which Rome later developed.

Brave, mighty, reasonable and courageously handsome Aeneas was suitable for one of the main roles in Greek and Roman myths. According to his genealogy, his mother was a goddess whom no one could resist, and Zeus himself was an ancestor on his father's side. When the Achaeans attacked the Trojan king Priam, the Dardan king Anchises was not in a hurry to come to his aid. He decided to intervene only after the Achaeans destroyed the city of Pedas, allied to the Dardanians. Having formed an alliance with Priam, Anchises sent a detachment headed by his son Aeneas to besieged Troy. Fate, which condemned Troy to death, meant salvation to Aeneas, and the gods who helped Aeneas were nothing more than its performers. He was destined to preserve the genus Dardan and rule the Trojan people - and then his sons, grandchildren, and all subsequent descendants. Of all the Trojan leaders, only Aeneas escaped from the burning Troy and led her father Anchises and son Ascanius out of her. On twenty ships, Aeneas sailed away with Trojan refugees to the west in order to find a new homeland in Italy. For seven years, Aeneas traveled through the Aegean, Ionian and Tyrrhenian seas, visited many countries and underwent many vicissitudes of life. On the way, his father Anchises died, on Crete Aeneas was almost a victim of a pestilence, not without meetings with harpies and Cyclops; Aeneas safely passed through the fire-breathing Etna, escaped Skill and Charybdis, but then a storm swept his ships and carried them away from the shores of Italy to the shores of North Africa. There Aeneas warmly met the Carthaginian queen Dido, who fell in love with him for his courage. He would have gladly accepted her offer of a hand and heart, but at the behest of the gods, he was forced to set off again, to Italy.

Aeneas in the Essays

Is Aeneas Pious
What impression is given of Aeneas?
"The Aeneid" - an epic poem written by Virgil
Love is Pain
Dictaean fields of Crete
Analysis of Virgil's Aeneid Based on The Odyssey
Who Do You Blame For The Tragedy Of Book IV Of The Aeneid?
Analysis of The Aeneid and The Odyssey
The Tale of Cupid and Psyche: Love Stories
Two Visits to the Underworld 750 Years Apart: The Odyssey and the Aeneid